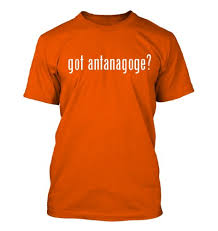 Antanagoge is a rhetorical device that means: putting a positive point on something negative. (2) answering the charge of an adversary, by a counter charge.

Example: She always forgets my birthday, but she gives me gifts during the year.

He lost his job, but he’s looking forward to spending more time with his family.

Our ears heard it, but we could not believe our ears.

The theory sounds all wrong; but if the experiment is a success, I cant worry about theory.

“Next time there won’t be a next time.”   (Phil Leotardo in The Sopranos)

To report that a raise in wages is still under discussion is to tell us that there is nothing to report.

Nothing is worse than doing nothing.

Anastrophe is the deliberate changing of normal word order for emphasis. For example:

“On a black cloak sparkle the stars.”

“Bright he was not.”

Antanaclasis is when the same word is repeated but with a different sense each time.  Antanaclasis creates comic effect when used in the form of irony and pun. Political leaders make use of this technique in order to persuade and draw the attention of audience.

The Rhetorical devices euphony and cacophony are opposites. Euphony is the use of words having pleasant and harmonious effects by using long vowels and the consonants l, m. n, r, f, v, y,  th, and wh.

An example of euphony is from ‘The Lotos-Eaters’ by Alfred Lord Tennyson: “The Mild-eyed melancholy lotos-eaters came.” John Keats in ‘To Autumn’ uses euphony with “Season of mists and mellow fruitfulness.”

Cacophony in daily life refers to sounds such as music that is too loud, people talking, babies crying, dogs barking, etc.Cacophony in literature consists of a mixture of harsh and inharmonious sounds, usually words with the use of consonants, p, b, d, g, k, ch-, sh-, etc.  Writers use those words when writing distasteful situations with disorder and confusion. 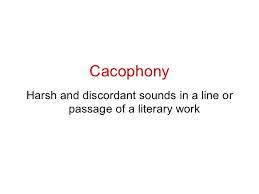 Agape they heard me call.”

by Samuel Taylor Coleridge in “Rime of the Ancient Mariner” is an example of cacophony in literature.

Do you tend to use cacophony or euphony?

For example: “It is boring to eat; to sleep fulfilling.”

“The instinct of a man is
to pursue everything that flies from him, and
to fly from all that pursues him.”  (Voltaire)

“Judge not, lest ye be judged”

Information from Silva Rhetoricae: The Forest of Rhetoric and Literary Devices

Antiphrasis is a figure of speech in which a phrase or word is opposite to its literal meaning in order to create an ironic or comic effect.  Examples:

“The Chihuahua’s name is Goliath.”

“The actress was a mere babe of forty years.”

“Get in, little man,” he told his six foot tall friend.

Antiphrasis surprises people, making them stop and think what is really meant. It can be used in sarcasm, reversing something to show the intended meaning.

Epitasis is the addition of a concluding sentence that merely emphasizes what has already been stated. A kind of amplification.

Eat your sandwich. All of it.

Anesis is the opposite of epitasis. It adds a concluding sentence that diminishes the effect of what was said previously.

The little dog is cute and obedient. That said, he smells like a polluted mud flat at low tide on a hot afternoon.

The employee was smart, efficient, and generous. However, his temper was off the charts.